When I was in Barcelona last February, I tried to see as many Antoni Gaudí buildings and landmarks as I could. I discovered that there was a relatively new site, which only opened to the public in November 2017: Casa Vicens. The first house designed and built by the iconic Spanish architect, Casa Vicens was originally made for the family of stockbroker Manel Vicens i Montaner. I managed to arrive just before the golden hour and got to take in the richly detailed space with its beautifully tiled exteriors and interiors, including the roof terrace, as the sun was setting. It is a magical place.

When I finally left, I came across another enchanted scene in a small shop called Cayena Blanca, filled with objects decorated with the bright floral artwork of Venezuelan artist-designer Maria Montiel. At that very moment, Maria was putting the finishing touches on a painting and I watched as she dropped, dabbed, and moved the vivid watercolors deftly across the heavy, richly textured paper. This painting turned out to be the first in a series for a show in Brooklyn. As Maria describes the show she titled “Folklore,” the series is “color, drama, chaos. An explosion of emotions that converge in an intense new outcome, that represents [her] roots as an immigrant artist with a tropical soul in a Mediterranean land.”

Witnessing this creative moment in Maria’s atelier/shop was profound. Barcelona is steeped in art, life, color, and stories and it was such a serendipitous gift to see this artist reconnecting with her “tropical soul” in her adopted home. Maria spoke with me as the watercolor painting dried and her puppy slept.

Why did you choose the name Cayena Blanca?

Cayena is a flower (the Hibiscus rosa-sinensis ) that is very typical for my country. Cayena blanca means this flower, in white.

It is very unusual. So I really liked the idea of having a blank canvas and I love flowers. And I liked that it is in Spanish.

How long have you had your business, your brand?

I’ve had the brand since I was in Venezuela. I started with selling my silkscreen printed tee shirts, bags, things like that. I created the brand, the logo and stuff. Then in 2007 when I came to Spain, I studied textile design and illustration. I stopped with the brand and the production for a while, then I went back, and back and forth with it. I opened this store last year (2017) in July. Before that I used to work at home and had shared studios. This is the first time I am by myself and have a store that is open to the public. And I don’t even have a year with it, so it’s very new.

Where did you study textile design?

In Madrid at an institute called Istituto Europeo di Design.

And what brought you to Barcelona?

My husband…well, we wanted a change. And he was looking to work here; he’s a web developer. He was working at a big company and he wanted to work with a design studio that’s based here. He interviewed, they liked him, and we came basically for that. I really like Barcelona, much more than I like Madrid. But at the beginning when we came from Venezuela, I wanted to study this particular thing (textile design and illustration). The same institute is here in Barcelona but they don’t have the same courses. That’s why I went to Madrid initially and then we stayed there working and doing different things.

So you had wanted to come to Barcelona originally from Venezuela? Yes. Where in Venezuela?

The city is called Maracaibo—it’s very close to Colombia. 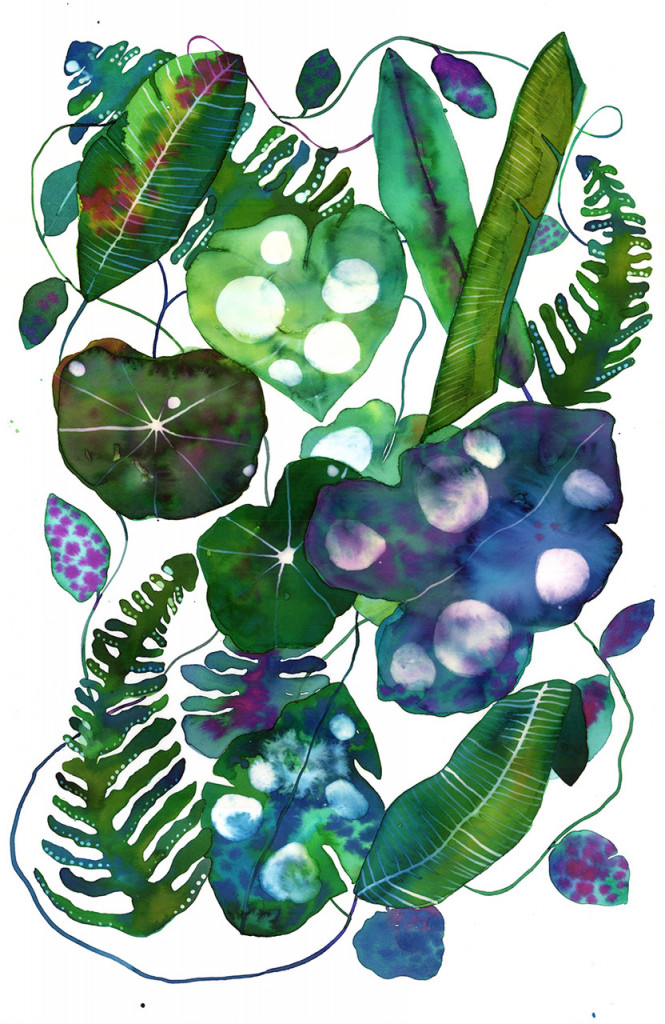 Must still be a change for you.

Yeah, it’s a big change. I still…I always talk about this with my friends and my husband. He’s also from Venezuela but his family is from Europe, so he has a European passport. But it’s been really hard to be away from your country, your family, and your friends. It’s been eleven years and things are even worse than when we left. So I think it’s going to be with us, the feeling is going to be with us for a long time. Forever.

Yeah, we can’t go back right now. And I don’t know if I’m going to see that in my lifetime. So it’s really sad. I have a one-year-old and I want to show him all the things that I grew up with and they don’t exist anymore.

It’s interesting that we’re talking about this because your work is very [vibrant]. It’s something that you started in Venezuela and it’s so vivid, colorful, and full of life. It just pops out at you. What inspires your work here?

A lot of different things, but it’s more what I’m feeling at the moment. And I think I have my culture very much within me, no matter the fact that I’ve been here for eleven years. It has also inspired me being in Europe. I especially feel very inspired in Barcelona; the architecture, music, people, everything—it’s very inspiring. And I think that [combined] with that feeling that I have, of who I am and my memories…Because when you leave something behind that was very good, but maybe it went to a very bad shape after, you remember it [being] very good. It’s like a concept that doesn’t exist any more. But I think that’s what [inspires me].

My dad was really into plants; we always had plants—a lot of plants. We had a lot of inner gardens—when you have a garden inside of the house. He also grows orchids and so the life that I had, it was very colorful. And my country is a very colorful country.

I love that with the technique that I use…Well, my work has been through a lot of stages. It has changed a lot. I’ve always worked with the same materials. These particular materials have really amazing colors.

So with color itself it has been a journey because I’ve always tended to saturate a lot of the color. It can be less professional if you work with clients, because I work with clients doing textile design. Some of the critique I get is: ‘These colors are too saturated,’ ‘You’re using a lot of color,’ ‘Try to pull it down.’ So I’ve experimented a lot with different saturations and things like that.

What materials do you use?

These are liquid watercolors. There are also inks, and they’re a lot more fluid and free and expressive than the other kind of watercolors. I don’t know [why], I’ve always liked this technique. It can be very messy but I love that I can be very expressive and the mess that you create is really nice. I also work sometimes with markers. I have black line drawings where I just use black marker. And I also have other different [mediums].

You mentioned that this piece was a different style for you, because it didn’t have black lines.

I’ve been creating these original pieces for a client that I have. He’s an agent and he sells patterns at big fairs. 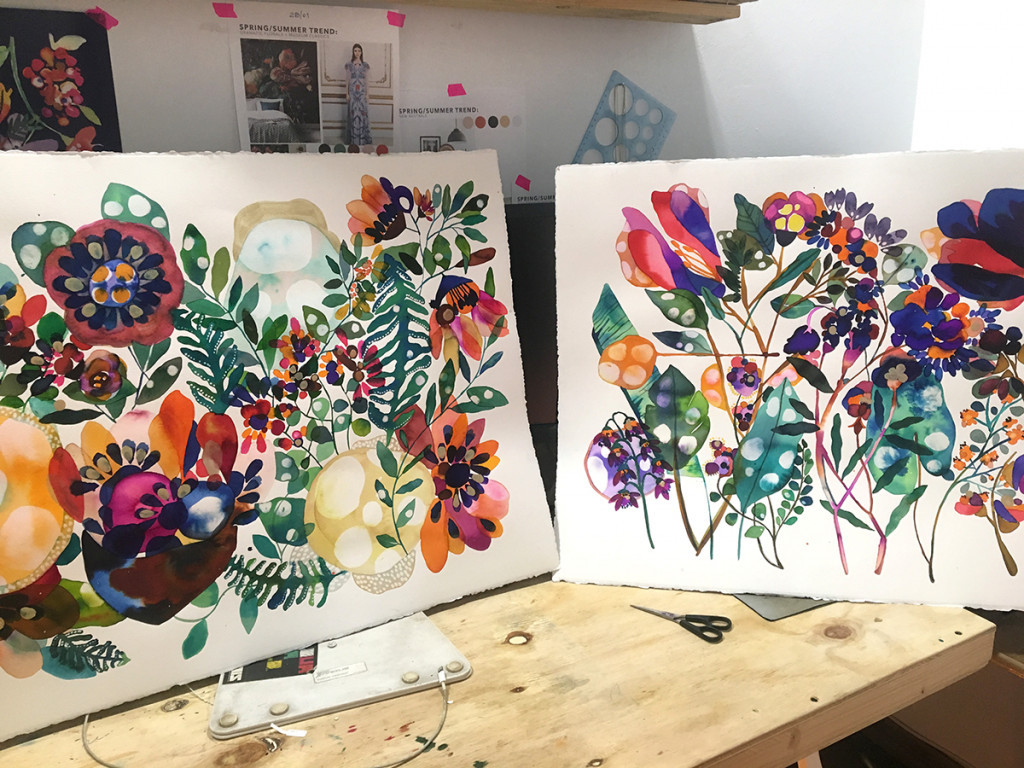 And then are they turned into textiles?

Yes. So what I create for him is the digital file. I think three years ago he started asking me for original paintings, and those sold better. He has a big scanner, so he digitalizes everything and creates the final digital art. He also presents the original piece to the client. So over these years, I’ve done not a lot but I’ve done quite few. And with the last ones I did, he’s always pushing me, ‘Yeah, this could be better’ or whatever. So I’ve been creating this other style and the last pieces I sent in December were for me really nice—I was sad to see them go.

I’ve spent this year with the store and the baby; it’s been really crazy. The last thing I do is [paint]—I don’t have time to paint. This is something that is bothering me. I do this [type of painting] for [the agent] because he sells the work and I need the money. This store is very busy at some moments but other moments, it’s not. And I work here because I can’t work at home, I don’t have space. So what I’m doing is I work for him. Then I see all these really cared-for paintings that I did for him and had to send to him. I lose every copyright and I can’t use them for anything. And then this gallery asked me if I wanted to do this solo show and that’s why I agreed to do it.

So I don’t have time, it’s crazy. But it’s a great opportunity to paint because it’s really healing for me. I’ve been very stressed lately and it’s really hard. So I said ‘yes.’ I’m nervous but I’m also excited that I’m going to create work that I can show. So I want it to be very special. I just started doing this one painting to see what style I was going to use and I think this is going to be it.

And now a year later, are you still in the same space?

No. I decided to close the store to the public a couple of months ago, in late January. I’ve been teaching watercolor painting in small workshops and I wanted to focus on my painting and teaching, so I moved a little more into the heart of Gràcia. I am working at a cultural space and association called Can Allà.

Have you continued with the same technique?

Yes, I have. I love [working in] watercolor. Also, I have been incorporating gouache into my paintings and experimenting with other surfaces like wood.

Are you exploring any other new mediums or techniques now?

Yes, I am falling in love with gouache! I think it’s good mixed with watercolors. Also I’ve been experimenting with typography and collage.

What are you working on at the moment?

I am working with a new agent, and we are planning new approaches focusing on [presenting] my paintings for interior design.

Has anything changed or grown since we met last February?

A lot. The decision to close the store was a really hard one. After two years I knew it was the right move, I needed to focus on my art. I found myself so stressed with numbers, productions, maintenance, et cetera that I never had time to work on my style and this was making me miserable. I also changed agents and this has been a hard and scary process but I am very happy with all the changes I’ve made so far and am feeling very optimistic.

This site uses Akismet to reduce spam. Learn how your comment data is processed.

You can toggle right click protection within Theme Options and customize this message as well.

You can also add shortcodes here.